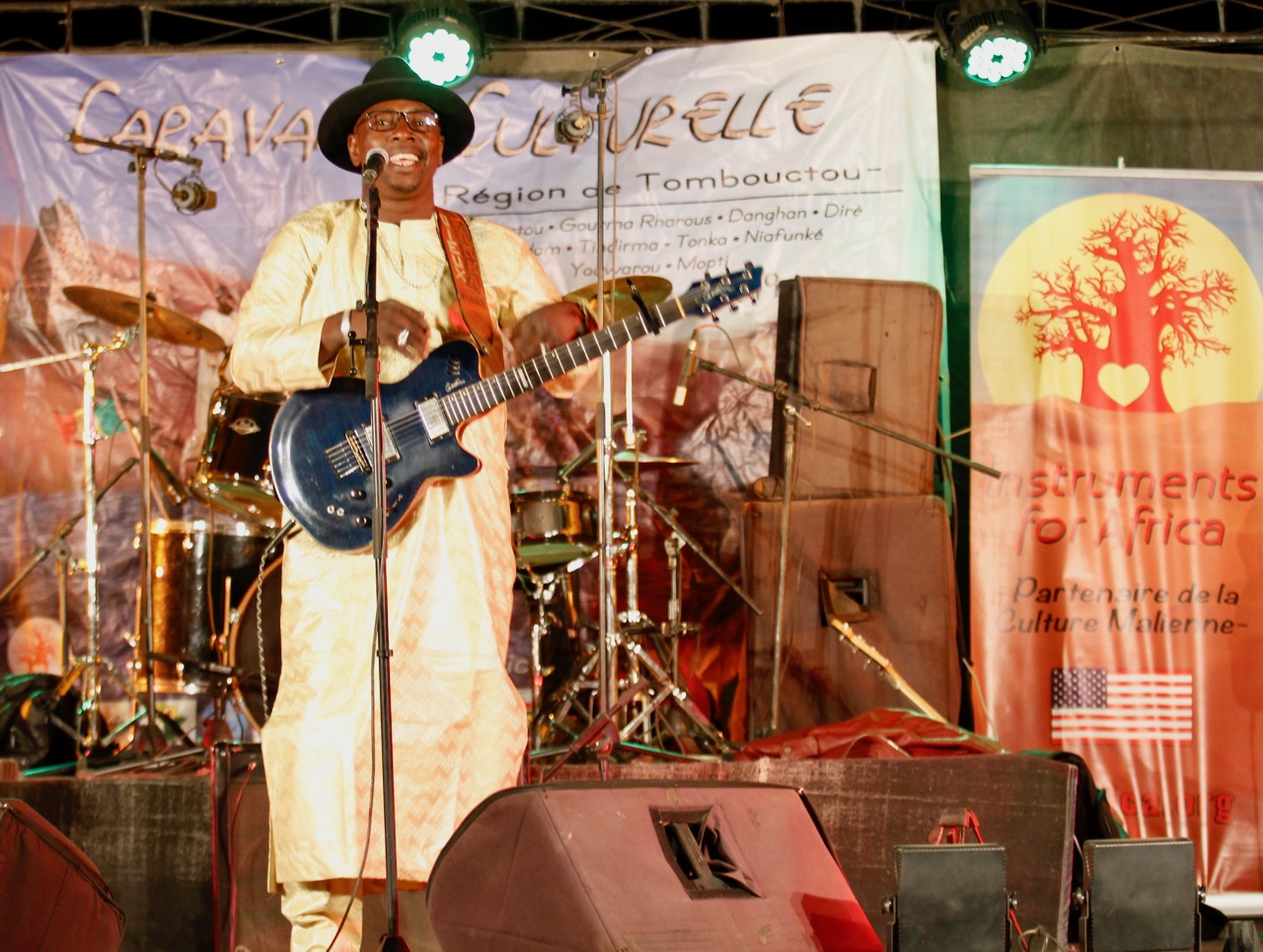 Niafunké, the city of children of the same mother, to the lips of the Niger River has hosted from the 21st to 24th of February, the cultural nights in tribute to the late Aly Farka Touré, guitarist emeritus who died in March 2006. Organized by Alkibar Junior and the youth of Niafunké in partnership with the NGO Instruments for Africa with the accompaniment of the administrative and municipal authorities, this tribute festival has been furnished with performances by musicians and traditional troupes, the canoe race, rap contest, conference-debates, focus groups and film projection. The goal is to revive the cultural potential of the land and cultivate peace and social cohesion between communities.

At the outset, the Mayor of Soboundou, Mr. Samba Bâ, welcomed the festival-goers and recalled that these nights at the tribute of the late Aly Farka Touré are animated as part of the perpetuation of a tradition.

Sékou Touré is a member of the local orchestra Alkibar Junior and president of the organizing committee. For him, it is imperative to pay tribute to Aly and continue the legacy he has bequeathed through the Soko festival.

“We, Alkibar Junior, our master is Afel Bocoum who was the disciple of the late Aly Farka Toure. The latter instructed him. And in turn, he did the same with us. So all we had not done for Aly, that’s beyond us. Since 2006, we have been organizing this festival and we felt it necessary to pay homage to the late Aly Farka Touré every year even if it’s only one night to perpetuate his memory because Aly represents for Niafunké a giant tree. Thanks to him, our culture and that of Mali have been haloed on the international scene. For the occasion, we appealed to the traditional troops of Dofana, Mangourou, Dagodji, and the musicians of Diré, Timbuktu, Niafunké and Bamako, “declared Mr. Sékou Touré, president of the organizing committee of the Soko Festival of Niafunké.

Testimonies to the dimension of the man
In Niafunké, it is difficult for people to say exactly what the late Aly Farka Touré represents for them: a peasant, a mayor, a brother, a guitarist, a musician … “What I know, if only the guitar of fire Farka Boureima had a soul, he would have made it speak, “said a festival with a smile on his lips but sadly upset that the man (Aly) is no longer witnessing the tributes that his followers devote to him.

“In addition to their festive characters, these cultural nights of tribute to Aly Farka Toure or Soko festival, are nights of repentance of prayer and meditation for the benefit of the memory of the outstanding musician, an undisputed and inconstable icon African music or even the world, “said Mr. Kassoum Sanogo, the first deputy to the Prefect of Niafunké. And to add that Ali was a good man, a humanist who has shown in all circumstances a high degree of sociability. “Who does not remember this man of contemporary style, slender and jovial, this inimitable musician-guitarist, a multi-instrumentalist of genius, with his captivating voice, which has shaken the world by imposing itself even in the country of Uncle Sam by rising to the highest podium of American music winning 3 Grammy Awards, “said Sanogo.

For Mr. Idrissa Oumar Kassambara, man of culture in Niafunké, Aly Farka Touré, the late Aly represents a large baobab tree. “Who speaks of Aly Farka Touré speaks of a great baobab of Niafunké especially in terms of culture and art. And since we lost it, we have many musicians and men of culture but not like him. Aly left a legacy and her children and others continue to work to perpetuate her memory in the context of the culture for example Afel Bocoum, Alkibar Junior, Aly Karkamba, Mahamoudou Kelly, etc. They continue to work on what Ali Farka Toure has left and follow in his footsteps, “he said.

Recall that the cultural nights or Soko Festival were marked by the performances of musical artists like Old Farka Toure, Afel Bocoum and his band, Dur Band de Diré, local rappers and traditional troupes of Dofana, Mangourou, Dagodji, lectures debates on the life of the late Aly Farka Touré, documentary film screening and the pirogues race.

“Our goal is to revive our cultural potential and cultivate peace between communities. This kind of event would promote social cohesion between communities that they are the same and that persevering in a conflict will never engender construction and development, “concluded the chairman of the festival’s organizing committee, Mr. Sékou Touré, who seeks the support of the Malian State and the technical and financial partners to perpetuate the tradition.
By Almoudou M. BANGOU